Master Your Music for Distribution

The days of audio mastering for a small amount of formats, such as Vinyl or CD are long-gone.

The continuous advances in digital technology have fractured the previous known mainstream distribution methods into a multitude of platforms and file delivery formats, with streaming becoming the front-running method for audio consumption for music creators and listeners.

What is music mastering?

Music mastering is the final step that makes music sound its best – perfecting needed technicalities before releasing to distribution.

The purpose of mastering is to balance audio with tools such as; equalisation, compression, limiting and stereo enhancement so that music sounds consistent, pleasing for listeners, and is optimised for playback across all systems and media formats.

How important is music mastering to artists and why should they do it?

Creating commercial sounding music is difficult, and without the proper knowledge, techniques, and tools; it’s unlikely that an artist’s music will be able to stand-out or even be accepted in a competitive music industry.

In addition, if an artist’s music is not properly mastered, or not mastered at-all, it can sound unbalanced, harsh, and/or distort; destroying it musically and creating a poor listening experience for the consumer.

Now more than ever audio mastering is needed to seamlessly bridge the gap between the audio production industry and music distribution industry.

Sage Audio Mastering Studio is at the forefront of music mastering for streaming – perfecting masters that accurately translate for all digital service providers.

To coincide with these distribution changes, many mastering engineers have also changed their approach and are now working to create masters to fit with the demands of streaming.

One example of this is the length that many mastering engineers go to make a master translate well on all playback systems after distribution.

The ‘Loudness Wars’ have been talked about extensively for many years, but what’s interesting about new distribution methods, specifically streaming, is that we’re starting to see the possibility of reverting back to more dynamic music.

Dynamic music is when a song is produced, recorded, mixed, and mastered in a way that the ‘loud’ and ‘soft’ parts of the song, along with individual instruments and vocal phrases are more accurately represented to the listener. This can create a more natural listening experience that better portrays the message and musical feel that an artist wants to convey to a listener.

In the past few years, streaming services began implementing limitations on music playback levels to create a better listening experience for the consumer, so music would sound more dynamic and consistent for listeners, while still being at a competitive loudness.

These new playback level limitations implemented by streaming services give experienced mastering studios, such as Sage Audio, the opportunity to create excellent dynamic masters that translate best for streaming services.

Your music with loudness normalisation and streaming platforms

If your music is being distributed to multiple platforms like Spotify and iTunes, through any music distributor similar to Horus Music, it will go through a process of loudness normalisation this is a requirement of the platforms that’s put onto the distributor. This is why it’s always best to start with the highest quality (24 bit lossless quality) audio and to get the right mastering.

The mastering engineers at Sage Audio pride themselves on getting music to sound ‘loud’ while retaining dynamics, power, and impact. It’s a skill that takes a lot of practice and discipline to do right.

Just like any well executed engineering, it’s a job of detail, technique, and experience; involving some type of dynamic content trade-off in exchange for loudness.

Overall, the goal of making music loud is so that it competes against other music that is competitively loud.

Different meters will show different results, and mastering studios use all of those results to determine how music’s loudness will translate through various distribution systems and platforms.

Music streaming normalisation: What this means for mastering.

Most music streaming services have implemented their own style of loudness normalisation.

Often they use various custom-developed detection algorithms to either turn music up if the level (loudness) is too low (leaving the dynamics intact and avoiding distortion or over-compression), or an algorithm may leave loud music alone if the level is above the algorithms nominal threshold.

This is dependent on how the algorithm was setup during development, and many change with new updates.

Most streaming services normalise music to around -13 to -16 LUFS (loudness units relative to full scale). This gives mastering engineers the opportunity to leave music more dynamic while competing well in loudness against other songs on that platform.

There are many complications that can arise with these variable normalisation standards because currently there is no consistent standard, creating non-uniformity across different streaming platforms.

For instance, some streaming platforms will alter the sound recording by compressing audio that’s too low in level to change the (loudness), thus changing the intended sound of a mastered song.

This is a sensitive issue for many producers, artists, mixing, and mastering engineers, because when masters are distributed to streaming services, engineer’s, producers, and artist’s, work hard to create a specific sound – and would like that sound to be translated to listeners as intended, without a streaming service changing the sound of a recording.

This can cause some difficulty when trying to accurately translate music to streaming – especially without an experienced mastering engineer’s assistance.

Regardless of these concerns, over-all, many of the limitations that streaming platforms create are also a leap-forward into the possibility of allowing for more dynamic music; giving mastering engineers more freedom to create polished and engaging masters than has been possible in the previous two decades.

In addition, music streaming services have begun to take steps into streaming high-resolution audio, opening the door for more quality playback for listeners and reducing the need for other high-fidelity formats. A few examples of these are Qobuz, Melon and Tidal.

Mastering is the last step in the creative and technical process of preparing your music for distribution.

Your mastering engineer will know the difference between 24-bit/96k and 16-bit/44.1 (hi-res vs CD format), a MFiT vs CD-R master etc, as well as many other formats that may be required for your distribution needs.

In addition, your mastering engineer will be aware or subtle but important details, such as some loud masters can clip or contain overs when down-converted from WAV to other compressed audio formats.

To avoid this, the proper amount of headroom is needed to allow for these down-conversions, and in many cases, it’s advisable to leave as much as 1dB of headroom to avoid clipping and inter-sample peaks. Your mastering engineer will be able to adjust for these technical needs with ease.

Different digital service providers like iTunes vs. Spotify have different file format delivery recommendations. For example, iTunes has their own high resolution file format. Apple’s Apple Digital Masters (MFiT) which accepts 24-bit WAV files at or higher than a sample rate of 44.1KHz.

Tip: Knowing how to treat clipping and having your final masters free of unnecessary distortion is important for creating the best listening experience for music listeners. If your mixes are printed loud, with little headroom, instancing a true-peak limiter with a ceiling output set to as little as -0.20 can save you from having a distorted mix before distribution.

Below is a image of a true peak limiter set with a -0.20 output ceiling to avoid inter-sample clipping. 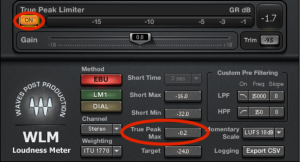 Above is an example of before and after true peak limiting on a general DAW master bus meter. Limiter threshold is set to -0.20dB, preventing the track from clipping and creating unwanted distortion.

What To Give Your Mastering Engineer and What To Expect Back

What Your Mastering Engineer Should Receive:

What You Should Receive Back From Your Mastering Engineer:

It’s Time To Distribute Your Masters!

There’s an incredible amount of music distributors out-there that will upload your release on various platforms such as Spotify, iTunes/Apple Music, Google Play, Amazon, Tidal, etc.

Be sure to choose a distributor that has resources that are specific to your needs and a reputation for creating results. In addition, some may have features like marketing tools to promote your music, song tracking analytics, and reporting metrics for booking agents and managers.

Horus Music and Sage Audio live in an exciting time where artists have more opportunities than ever before; where distributing your music 20 years ago revolved around many complicated and risky deals, now your tracks can be mastered and distributed around the world at the click of a few buttons and at a really affordable price. 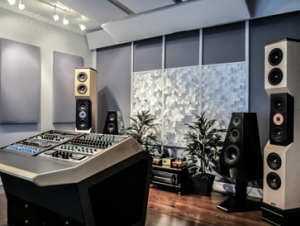 is professional music mastering studio in Nashville, Tennessee – pushing the forefront of audio engineering and mastering for streaming platforms, such as Spotify and iTunes.

PrevShould you consider Band Merchandise?
Why You Need an Artist ManagerNext