YouTube Art Tracks can be confusing, but they are essentially a YouTube version of a piece of music that they have automatically generated. Art Tracks are created so that YouTube has a complete music catalogue of all tracks they are sent. They are beneficial to artists because they help artists get music in front of millions of YouTube users. Both free and premium users can stream tracks in this way.

One Art Track is created for every piece of music that is submitted and identified based on their ISRC code. Music can only be sent to YouTube and made into an Art Track from a YouTube partner such as Horus Music.

If multiple versions of a track with the same ISRC have been uploaded (for example, if the recording appears on multiple albums or as part of a compilation), YouTube creates the Art Track using the version with the earliest release date in each territory. 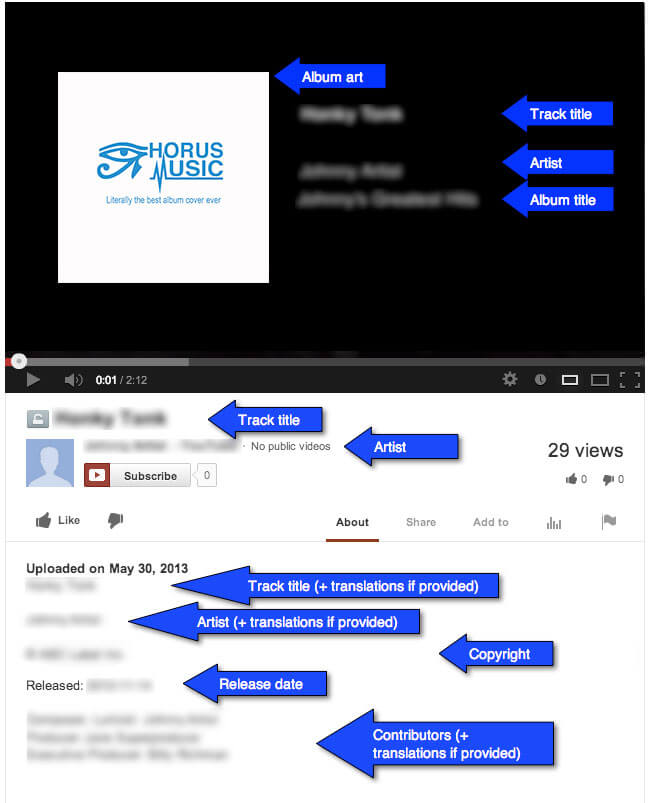 YouTube Art Tracks will appear in the same places as other music videos, including album playlists and in search results. There is a standalone app called YouTube Music (explained here) that allows users to toggle between audio and video. By opting for audio streaming to save data or battery on your phone, you will see Art Tracks appear. If a recording already has a fully produced music video, the Art Track for that particular song will be unlisted and undiscoverable in search etc and the official music video will be used instead.

You’ve probably come across Art Tracks already without even realising it. An example of how they look is on the right, along with an explanation of the information that is displayed. They have a basic background with your artwork on one side and your metadata on the other side. They allow artists to have their music seen and heard by more fans as well as providing an additional income stream. Royalties are earned whenever someone streams your Art Track on YouTube.

YouTube Red is a monthly subscription service that removes advertisements from all videos and the areas around them.

Through these, subscribers have the ability to watch videos offline and can continue to listen to the videos when they close the app. Videos that you wish to watch offline are downloaded to your device and available to watch for up to 30 days without an internet connection. However, you will not be able to like or comment on an offline video. Art Tracks are also included in YouTube Red subscriptions.