The new way to get your music to DJ’s

How? Well, once your tracks are accepted you will have a global campaign created online and be set up with your own login and password so you can read all your feedback. The feedback is also posted on Twitter and as they include web players for Spotify and Juno – you’ll earn royalties whenever the DJ’s play your tracks.

All of the feedback received from DJ’s is posted on social media so you have ready-made content to retweet to your followers about how music industry tastemakers and influencers are digging your tracks. You can also use these testimonials to include on your website and EPK’s etc.

The format on Twitter gives you the DJ’s Name, the station, the track, the label the DJ’s feedback on the track and a rating out of 10.

Here are a few examples:

The site is fully mobile and so your campaigns can be viewed by DJ’s whilst they’re on the go. The DJ’s hail from all over the world, so to cater to this they have the option to translate the text of your campaign into their own language.

Here’s an example of the feedback from the tastemakers, some of which include links to their own Twitter pages, so you can mention and thank the tastemakers: 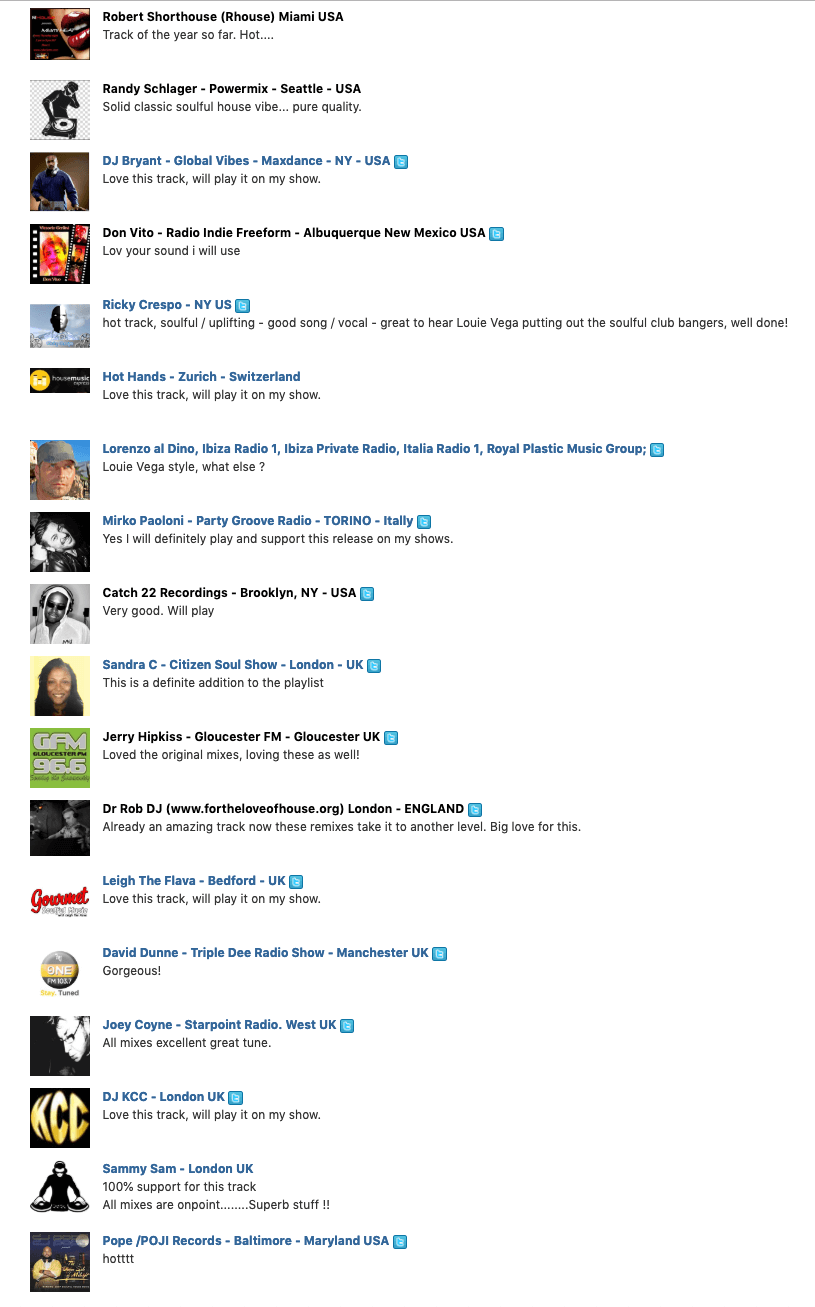 The radio plugging works on a chart basis and you’re competing against all the other people that use the service to get their music into the hands of radio DJs. Once you’ve been accepted, your campaign will go live on the system and at first, it will be no1 in the charts. If you get 10/10 for your track you’ll stay top of the charts, the percentage will then change as the feedback comes in and alters your chart position until your release finds its natural position. The Top 30 is the only chart of its kind in the world, that can’t be tampered with as only DJ’s who have logged in can leave feedback and impact the chart position and only once they have will their feedback work the chart. This delivers as honest a Top 30 Chart as possible.

There have been over 8,000+ campaigns that have impacted the charts and clients have been from both the major label and the independents. The service was launched way back in 2003 alongside the first version of the iTunes download.

Here’s an example of one of our client’s campaigns live on the system: 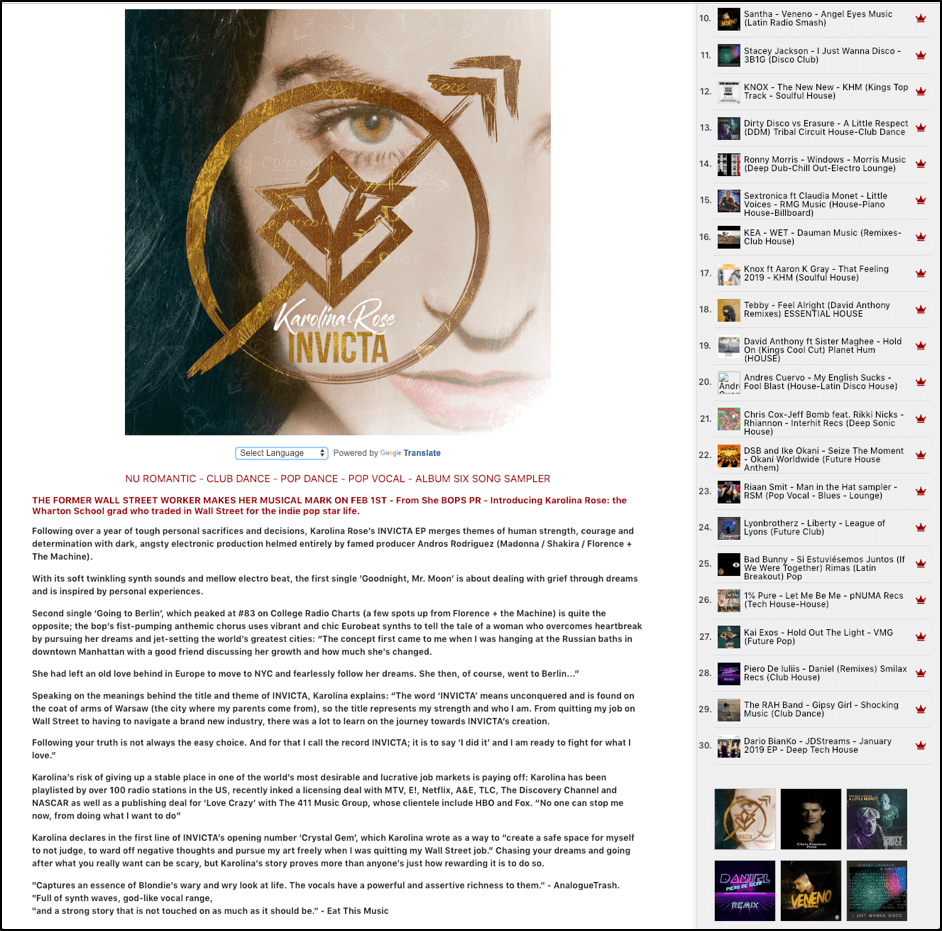 You’ll note in the right-hand corner of the screen you can see the top 30 charts.

Because you can add your streaming links and videos from DSPs you can earn royalties from your chosen DSPs like Spotify, VEVO, Soundcloud etc. Remember we also have video and audio packages available to get your content distributed to the DSPs in the first place. When any radio stations play your tracks you can then get evidence to submit to the See examples of the players below: 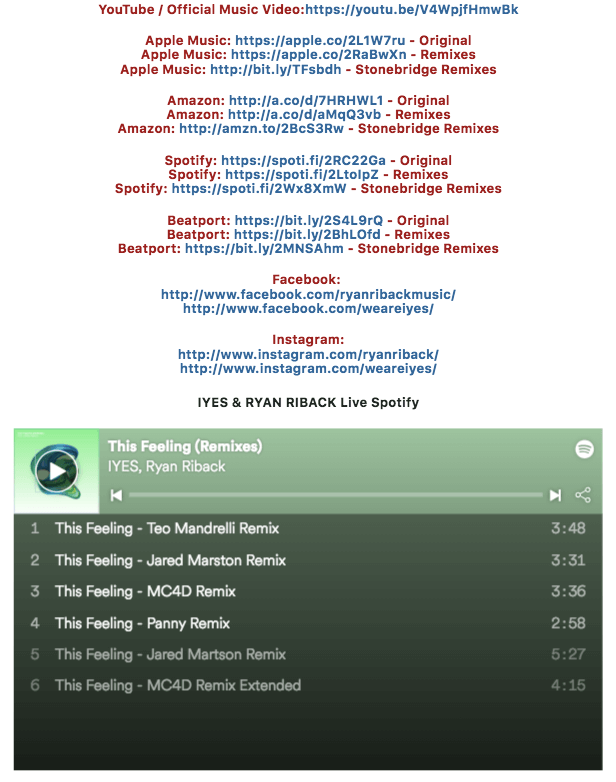 HOW TO GET INVOLVED

Please fill out the marketing form to let us know you’re interested in a radio campaign. The campaigns will stay live for 6 months with the ability to add remixes in for free before 12 months. The radio plugging service can work full albums, singles or EP’s and it doesn’t matter if the release has been out for a while, or is unreleased.

For more information including pricing, please take a look at our radio plugging package.

We look forward to working with you soon!

PrevWhat is Playlisting and how do I get onto Playlists?
Why Are Showcase Festivals Important?Next